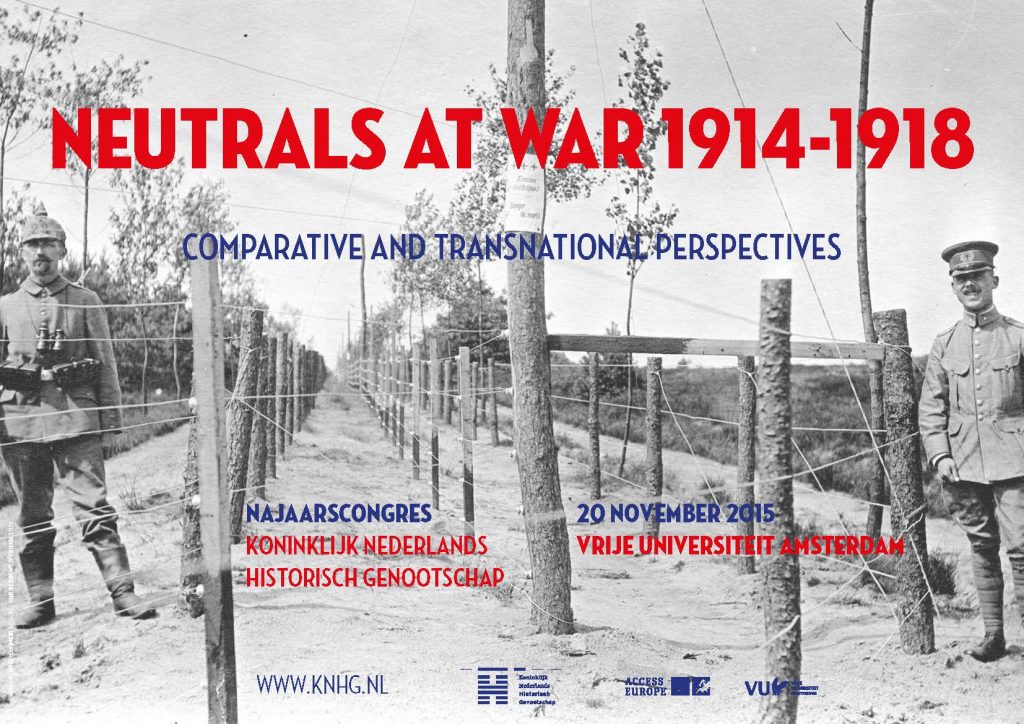 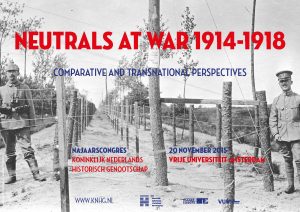 organised jointly with ACCESS/EUROPE and the Department Art & Culture, History, Antiquity of the VU University Amsterdam

The Great War (1914-1918) was the first world war. Although not all parts of the globe were affected in the same way, at the same time or with the same intensity, the global scale with which the First World War was waged is of paramount importance in our current understanding of the conflict. However, narratives of the war have been focused on the history of those who were official belligerents in the conflict, routinely neglecting those who remained neutral.

Meanwhile, histories of various European neutral countries, such as Switzerland, Spain, Denmark and the Netherlands, during the period of Great War provide ample evidence that global industrialised warfare had serious repercussions for those neutrals located geographically close to the fronts. Moreover, these histories have shown that neutrals were active participants in the war. They were engaged in diverse areas such as economics and science, culture and humanitarian relief.

In order to write a truly global history of the war neutrals and neutrality must be reintegrated. Yet, neither the histories of belligerence nor those of neutrality offer an exhaustive comparative perspective, which is a crucial first step for such a reintegration. Even more importantly, existing studies tell us very little about the war history of neutrality as the key issue. How was neutrality understood in the ever changing context of the First World War, and how did those understandings translate into actions?

Re-evaluating the global history of the First World War, and the place of European neutrals in it, is both apposite and urgent. As part of a larger process of searching for a European foundation myth, European leaders – including German Federal President Joachim Gauck and French President François Hollande – have argued that the European project was ‘the best way to honour the [Great War] dead’. Speaking in front of a First World War monument, they recast the European Union as the best safeguard against a repetition of the useless slaughter of the First World War in which all participants were, essentially, victims. As many of the former European neutrals now form an integral part of the European Union, we need to reflect on the potentially divisive nature of this new foundation myth. Since in most war narratives neutrals feature only rarely, in no way can they claim to be part of this new universal victimhood. Rethinking neutrals’ relations with the belligerents and, more generally, to the war, will help us to assess critically this new European foundation myth. Additionally, the fact that two of the World War neutrals, Norway and Switzerland, are not EU-members but in many ways were closely involved with and affected by the European conflict serves as a contemporary parallel to many of the issues with which this conference will deal.

Neutrals at war, 1914-1918 will be explicitly comparative and transnational in nature. We aim to highlight key differences in the various approaches to neutrality, and the transnational nature of the discourses that interacted with these national approaches. Our aim is to reflect on current research, but also to develop a new framework for neutrality studies in the context of global warfare.