The KNHG at the Historikertag in Münster 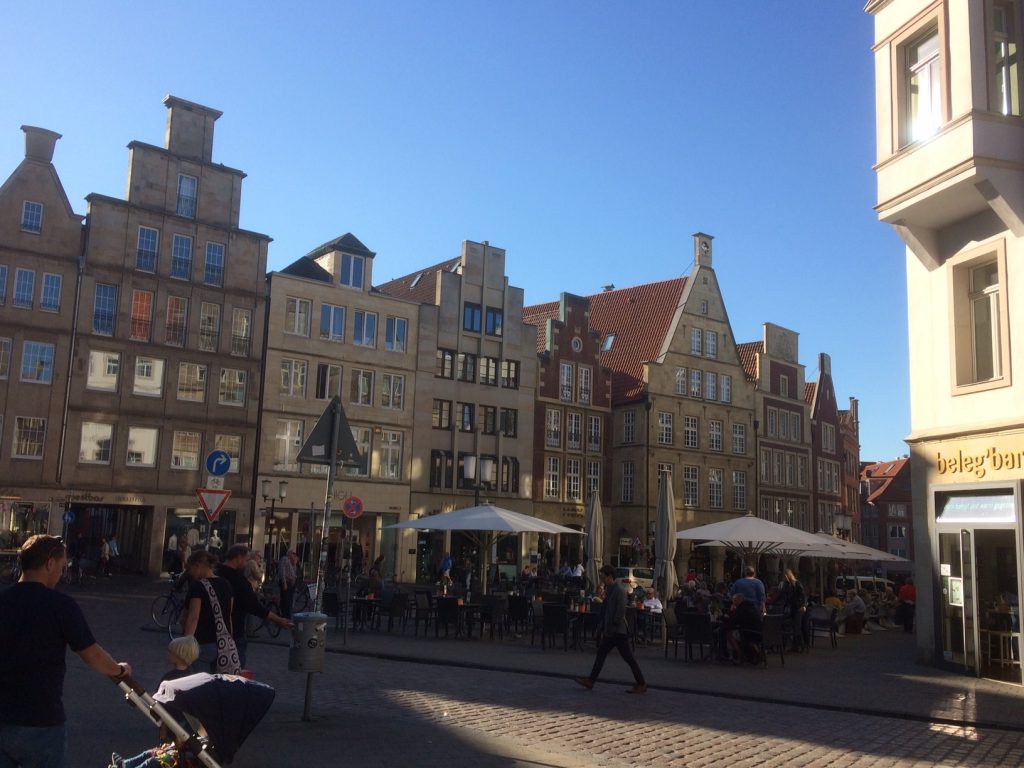 The KNHG at the Historikertag in Münster

As members of the Dutch sister organization of the VHD, the staff of the Royal Netherlands Historical Society was fully present at the Historikertag, organized from the 25th until the 28th of September in Münster, Germany. We attended inspiring panels, discussed with and met co-workers in the German historical field and enjoyed the beautiful city of Münster itself. Together we wrote a rapport on our overall experiences. 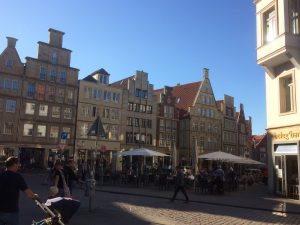 The Prinzipalmarkt in Münster, © Tessa Lobbes

Lectures by Dutch historians during the Historikertag focused, among other themes, on shared Dutch-German histories. Royal marriages, migration and wars urged Germans and Dutch in the past to consider each other as intruders, but also as friendly neighbors and relatives. The biographies on the nineteenth-century Dutch kings Willem I, II and III induced a panel with Frans Willem Lantink, Monica Soeting, Jeroen Koch, and Dik van der Meulen, who presented monarchical history as an entangled history in which related European monarchs faced similar challenges in the age of democratization.

In a panel on citizenship in times of conflict, Marieke Oprel analysed how Dutch officials classified German inhabitants of Dutch territory as ‘enemy citizens’ in the wake of the Second World War, which affected the idea of what it is to be Dutch as well. In a panel on the Dutch-Westphalian border region, Guus Meershoek demonstrated how Amsterdam policemen, in contrast to their colleagues in Twente, were reluctant to cooperate with German police in the 1960s. The panel urged Friso Wielenga to stress the potential of regional history to create multiperspectivity within Dutch national history. Werner Freitag’s lecture on Dutch laborers in the German border village Gronau in 1900 left the present-day historian, who is most familiar with labor migration since the 1960s, behind with a fascinating detail. Gronau’s Dutch neighborhood was called ‘Little Morocco’, as it was common to name districts after international conflicts, in this case the Morocco-crisis of 1910.

Many more Dutch historians were present and discussed a wide range of topics such as social segregation in the Dutch colonial society and the decolonization of colonial collections. 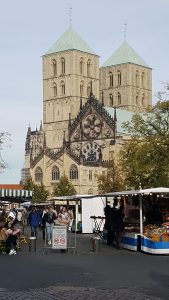 The long lasting effects of the Peace of Westphalia 1648

Describing in just as little as 200 words a panel about the long lasting legacy of the 1648 Peace of Westphalia is an impossible task but nevertheless I give it a go. An artwork by Dutch artist Rob Scholte, who was commissioned this painting for the 350th celebration of this peace treaty in 1998, was the point of departure. In his typical collage style, Scholte depicts figures and symbols that refer to boundaries, a-symmetrical power structures, war and destruction but also to Europe as a fortress. Twenty years to date this painting is still remarkably relevant.

The Peace of  Westphalia is long seen as the beginning of a European political framework and a blue print for diplomacy and international law. However this positivist view no longer holds true. Ozan Ozavci called it the ‘’Westphalian myth’’ and asked why this narrative persist even if it is misguided. Remco Raben stated that the global dimensions of Westphalia were non- existent. It was a treaty for and by European powers, non-European states were treated fundamentally different. 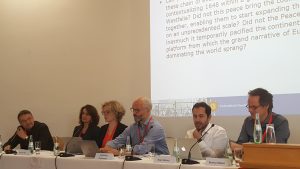 The question rose if we need to create a new narrative – or myth if you wish –  to replace the old. This question is more than ever relevant with geopolitical developments and modern myth-builders like Trump, Putin and Erdogan. The panel concluded historians should take their public role seriously in explaining factors and dimensions. Which prompted one of the moderators, Beatrice de Graaf, to write a column for Dutch daily NRC Handelsblad about the conference, this panel and the evaporating myth of peace.

Young Historians and their career prospects

People who have studied history can become almost anything they want. That is one way to describe an education that provides you with a strong qualifications such as a keen eye for the essential message in a book or paper, the ability to assess conflicting interpretations. It does not however give a clear prospect of a job, either inside or outside the academic world. The Historikertag 2018 in Münster provided answers to burning questions of bachelor, master and PHD students in an panel called “how do you work?”. 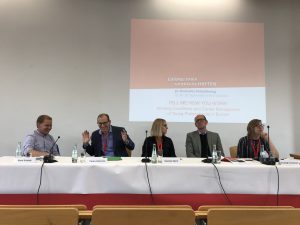 The “How do you work?” Panel, © Hadewijch Zwart

The panel was moderated by Marieke Oprel, a Dutch PhD-student and member of Jong KNHG and consisted off three participants. Pietro Delcorno who encouraged doubting students in the audience by taking them through his resume of failures and concluded that the tenure track for early career scholars is like the medieval unicorn: everyone knows it is there, it is just hard to find. The second speaker was René Schlott, who adviced students with slogans like, ‘don’t panic’, ‘keep chocolate on your desk’. And the third and final panelist was Kayleigh Goudsmit, communication professional at NIOD, who addressed the identity of and opportunities for historians outside the academic world. The presentations were followed by  a group discussion where inspiring  and personal stories unfolded. The conclusions of this panel were handed to the board of the VHD, which is the German counterpart of KNHG.

During the Historikertag young historians got the chance to present their PhD research during a History Slam. This setting made a direct confrontation between a broad audience and a specific historical topic possible. The young historians were put to the test to bring their subject and its civic and academic value across as best as they could.

In the evening of 26th September, two women and four men took the challenge  and stepped onto the stage. Soon it became clear that the most useful tricks consisted of timing, humor, a catchy title,  making apt connections to the present society, and interaction with the audience. The discussed issues varied from the representation of the German identity in American comic books to the identity politics of the roman emperor August. 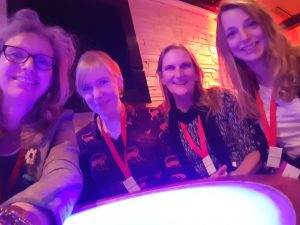 The KNHG Bureau at the History Slam, © Antia Wiersma

The researchers and their topics were left at the mercy of the fired up audience, who graded the PhD-candidates harshly  by using scoreboards. The combined sum functioned as the final grade and appointed the eventual winner. The victor, Kevin Lenk, M.A., blew the audience away with his research on conflictual victim constructions in the context of the confrontation of the Federal Republic of Germany with left-wing violent actors in the 1970s. The History Slam proved to be an inspiring, entertaining and low key evening, visited by a remarkable younger audience than the majority of the Historikertag.

For one day I attended the Historikertag 2018 in Münster, where I spent much of my time strolling around the bookstands, located in two large tents. Various publishers and historical organizations presented their most recent publications and happily handed out pens, bags, and other promotional materials. In such spaces, academics from different institutes and countries ideally come together, converse and consequentially broaden their network. However, in practice, such encounters unfortunately barely occurred.

Important was the presence of panel discussions and workshops on open access publishing, ‘digital’ historical research and the use of digital media in the Historikertag’s program. It is a challenge to keep up with the many and constant developments in the fields of digital humanities and online media, thus informative meetings about these topics are warranted. I attended a workshop about blogging, titled Schaufenster in die Blogosphäre. The session’s success heavily depended on input from the audience, which turned out to be its main weakness. Contributions of attendees were meager, since most were participating in this workshop to learn, not to share their own blogging experiences or lack thereof.

It is nonetheless commendable that the Historikertag’s organizers reserved space and time for panels and workshops like the ones mentioned above. These sessions help to clarify the recent developments in the rapidly changing digital environment and inform us historians about its consequences and opportunities.