Director of the Royal Netherlands historical Society (KNHG), Antia Wiersma, flew to New York this January to attend the annual meeting of our sister association, the American Historical Association (AHA). With her ‘hat’ on as director of the bureau, she compares the American annual meeting to the Dutch Historians’ Days and the other conferences as organized by the KNHG.

To compare the Dutch Historians’ Days and the American annual meeting is like comparing a munchkin with a giant. First and foremost because you cannot compare the countries just like that. In the Netherlands, you can study history at ten universities, while in the United States one has over 5,000 options. That difference in scale can also be seen in the size and shape of the above-mentioned conferences. The Historians’ Days registered 325 participants and boasted about 50 sessions in 2019. A decent amount for the Netherlands. But the annual meeting of the AHA past January in New York counted more than 5,000 attendees, while they had more than 500 individual sessions, film screenings, workshops and tours to choose from. While the participants in the Netherlands already felt spoilt for choice, as so many interesting sessions overlapped, in the United States this feeling can be even more  overwhelming.

A well-known saying in the world of realtors is ‘location, location, location.’ Where we in the Netherlands consciously chose for collaboration with a Dutch university for content and logistics, the AHA organizes their annual meeting independently. This means the locations they choose are mostly big conference hotels, which has consequences for the atmosphere during the conference. Some sessions are organized, literally, in ballrooms. And where a small room with 20 attendees can feel like a full house, a ballroom makes this amount seem trifle and inconspicuous. A small room often also means, more interaction between attendees and panel members, as we noticed during the 2019 edition of the Historians’ Days.

Everyone who has organized something on a certain scale, knows how the success of an event falls on preparation. Well thought through scripts, which take every eventuality into account, and from which a clear division of tasks follow, are of the utmost importance. It also helps if an organizer is somewhat of a perfectionist and minds the smallest details. In the Netherlands, we do everything ourselves. Our Historians’ Days were some sort of a small military operation. In the United States, the organization works with several agencies who tackle certain fields of the operation. This requires an entirely different kind of oversight and coordination. To be honest, with an event the size of the annual meeting you cannot do it any other way. And apart from a small Wi-Fi glitch, everything ran, as far as I could see, smoothly. 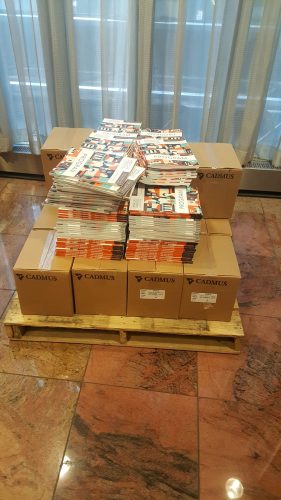 Another big difference with the Netherlands was, until this last edition, the role the AHA annual meeting played in the American academic job market. Employers and employees met each other during the conference, and job interviews were held. Academics looking for a job could turn, in preparation to the AHA website for advice, directions and tips. On their site you can still find documents titled Successful Strategies for Interviews at the Annual Meeting. Many American historians did find their job through this conference. However last June, the AHA has discontinued this, while arguing:… issues relating to the conference’s general tone and atmosphere, technological change, and financial considerations, especially for prospective interviewees. Instead of catering the job market, our American sister organization emphasizes different career perspectives for historians. Something the KNHG has been doing for a number of years now.

The AHA is still and foremost an organization for academics. The broadening to other historical professions is still in the making, even though the first steps have been taken. One of members of a panel I attended remarked, as a kind of a coming-out, how momentous it was that she could take part in that particular panel without holding a PhD. Another participant in the audience referred to the lower appreciation he gets as a university librarian, even though he holds a PhD. These were important lessons for me as director of the bureau of the KNHG because we emphatically want to be an organization for all historians, with or without PhD’s, young and old, working inside or outside academia.

In my capacity of director of the KNHG I attended quite a number of sessions on open access publishing. Partially to network with colleagues, partially to get up to speed with the state of play on this subject in the United States. In general I found a knowledge gap about Plan S and the obligation of financiers to publish in open access. The idea that Plan S might have consequences for historical journals published in the United States was not sifted through yet. Apart from that I learned, much to my surprise, that most journals think they can continue doing things the way they have always done and there is no need for them to think about or to bother with the developments around open access publishing. This made me realize how in some ways we, here in the Netherlands, we are ahead of our American sisters and brothers.