Cultural heritage and the emotions of nostalgia are closely entangled and both have become weaponised in populist national debates.  From the nostalgic reflection explicit in the ‘make America great again’ election slogan, to the yearning for an empire long gone that underlies Brexit and the vilification and incarceration of migrants and refuges, heritage has, in some measure, been implicated. Nor is this a new phenomenon, heritage studies itself arose as a recognizable field in the 1980s, at least in the Anglophone context, within the context of Thatcherite uses of heritage and nostalgia and Roland Reagan’s mawkish campaign cry ‘let’s make America great again’. At this time heritage was vilified as explicitly ‘capital C’ conservative.

This talk will theorise both the affective qualities of heritage and the processes through which heritage becomes a resource of political power. As both an emotional and political resource heritage becomes readily mobilised within right-wing populist movements and the talk analyses how and why this occurs. However, this utilisation, is not an inevitable quality of either heritage or nostalgia. There are important lessons to be learned by the left, particularly with respect to understanding the emotional qualities of heritage that in turn have implications for the analyses of populist movements and the mobilisation of heritage and nostalgia for and by the left.

Laurajane Smith is professor and director of the Centre of Heritage and Museum Studies, Research School of Humanities and the Arts, the Australian National University and Fellow of the Academy of Social Sciences in Australia. She founded the Association of Critical Heritage Studies, and has been editor of the International Journal of Heritage Studies since 2009. She is co-general editor with William Logan of Routledge’s Key Issues in Cultural Heritage, author of Uses of Heritage (2006) and co-editor of Intangible Heritage (2009); Heritage, Labour and the Working Classes (2011)and Emotion, Affective Practices, and the Past in the Present (2018). 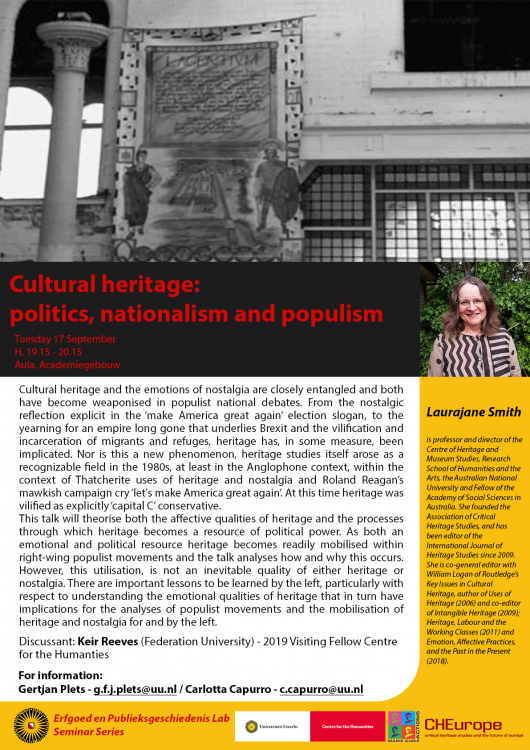